Aware that art has the power to push human consciousness to the next stage of development, L.A. Marler of Santa Monica has put together the Oil Is History grassroots campaign featuring photography paired with environmentally inspired titles to raise public awareness and facilitate the transition to cleaner energies.

Oil Is History grew out of the acclaimed Oil Is History photographic series of an auto graveyard in St Genevieve, Missouri. “…symbolic of waste—rotting metal that contaminated the land they were on…I felt I had to make a contrary statement about them, and the statement is that this scene is past tense, over,” says Marler.

Unless the green movement prompts us to live in a new way, it is nothing more than another marketing campaign.

In our disposable society, mountains of junk cars and everything else we mindlessly throw away endlessly accumulate in unseen places, from paper, plastics and colorful packaging to yesterday’s electronics, appliances and big ticket items. But only about 12 million cars are recycled each year. Three-fourths of each car (by weight) is sold for parts or melted down to make something new.

“Our lifestyles and environmentally-friendly choices are intertwined. The goal is to help others make smart choices, do their part to reduce carbon imprints and reduce global warming. I want to be partof the solution because I care so much about this country and want us to overcome our addiction to oil.”

The photos evoke nostalgia for the American century even as it reminds us that such a way of life could never have been sustainable.

The image Drive Thru is a play on words about our fast food culture of consumption. 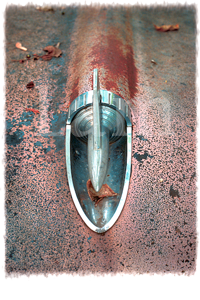 The title image Oil Is History, a close-up of a bullet hood ornament, is an aggressive image and a statement about the current wars we are fighting since the military is now the biggest consumer of oil, as well as the war on oil and our unsustainable economy.

The photos convey Marler’s theory of life cycles: “Dinosaurs became extinct due to the dramatic climate change of the ice age. Millions of years later people decided that fossil fuels (from dinosaurs) would be their energy of choice. Now we are realizing that these very gas-guzzlers burning fossil fuels may be a major reason for climate change and the potential extinction of life as we know it.”

On the back shelf in her studio is a bottle curiously labeled Faith In a Bottle, another of her creations. Launching this campaign has been nothing less than an act of faith. When she started Oil Is History, few people saw the relevance. Oil is such as big part of our world that we can scarcely imagine life without it, but how quickly we forget the just a century ago oil wasn’t an issue at all…and won’t always be in the future. “Hopefully we are intelligent enough to change course.”

Go shopping now for other affordable contemporary works of art by L.A. Marler on Etsy.