In November 2018, Instagram cracked down on celebrities and influencers with ingenuine followers. This ‘purge’ reduced significant numbers of fake, inactive, spam, bots, or as often discovered – bought followers.
Users may do so to appear more influential, to harness more media and therefore commercial attention, amongst others. But Instagram isn’t the only social platform faced with this issue.
Twitter has battled the problem of bots and spam accounts for many years. And with the British.

Grand Prix fast approaching (12-14th July), Click4reg.co.uk wanted to discover how many followers of the 20 competing F1 drivers are fake.
Using SparkToro’s Fake Followers Audit Tool, the Twitter handle of each driver was inserted to calculate the average percentage of fake followers. 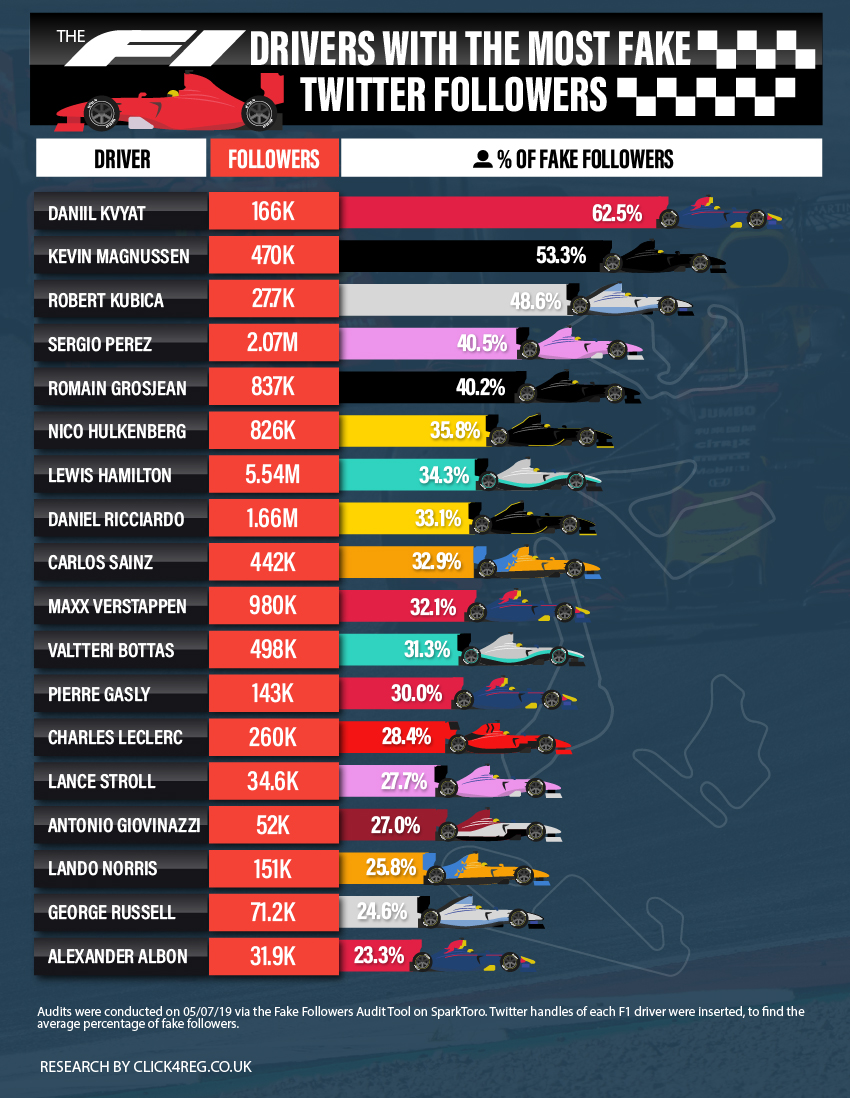 Drivers with most fake followers

This is probably one of the only pole positions a driver wouldn’t want.
Daniil Kvyat, of team Toro Rosso, finds himself in the top spot – 62.5% of his 166,000 followers are not genuine.
Kevin Magnussen, of team Haas, has the next highest number of fake followers – of his 470,000 followers, 53.3% are fake.

Drivers with the least fake followers

Alexander Albon is the most genuine driver in this study – only 23.3% of his 31,900 followers are fake.
In the second place, with 24.6% of fake followers, is British driver George Russell.

And in increasing percentages, the remaining and next best drivers for fake followers include:
Lando Norris (25.8%), Antonio Giovinazzi (27%), Lance Stroll (27.7%), Charles Leclerc (28.4%), Pierre Gasly (30%) and finally Valtteri Bottas (31.3%).
Fellow Brit George Russell scores significantly better than leader Lewis Hamilton, with a fake follower percentage of 24.6% – he places as the second-best in this study.

Each audit analyses a sample of 2,000 random accounts that follow {insert Twitter handle}, then looks at 25+ factors correlated with spam/bot/low-quality accounts. None of these, alone, indicate a spam/bot/low-quality account; but, when many factors are present, there’s a strong correlation with low quality. Factors like Display Name, Tweet Language and Over Sharing.