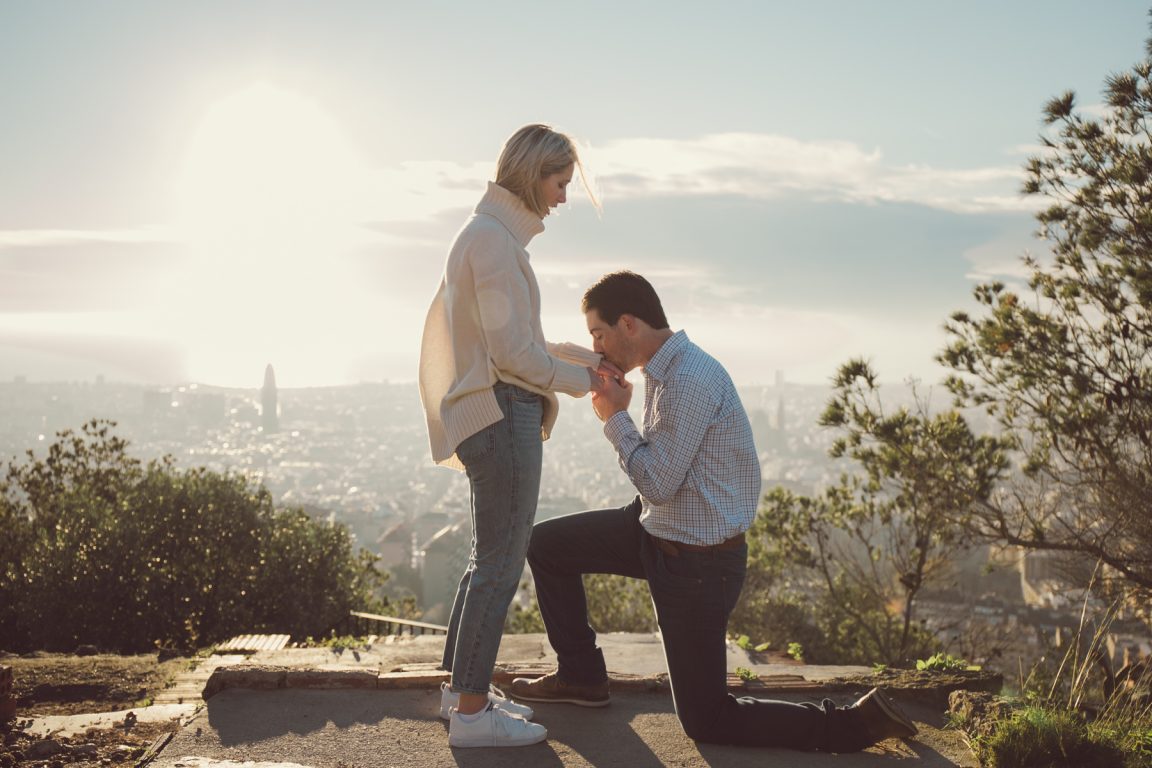 In one 2016 survey which questioned 10,000 people, it was revealed that Christmas Eve was the best day of the year to propose. But why? Some of the reasons for this included ‘magical’, ‘memorable’ and because it’s when the family are all together. Other popular dates to pop the question included the weekends in the run up to Christmas Day.

It’s no secret that couples like to take a holiday in the festive period too. Whether it’s to see family, explore the Christmas markets or simple enjoy a getaway together. So, if you find yourselves in one of the following places over the Christmas period, where would be the perfect backdrop for a proposal? Angelic Diamonds reveal their favourite spots…

When you hear of someone going on holiday to Prague, their lively nightlife scene might spring to mind. However, there are many sights to see in Prague that don’t involve the local pubs and one of these is Petřín Hill.

This point is in the middle of beautiful gardens and you can take a funicular to the top that departs from Ujezd Street in the Malá Strana. On top of the hill, there is an observation tower designed to be a mini version of the Parisian Eiffel Tower where you must climb 299 steps to reach the top to be rewarded with 360-degree views. You could pop the question in any of the beautiful landscaped gardens or head to a restaurant in Petřín park, such as Nebozizek which overlooks the Old Town, Prague Castle, Charles Bridge, and Vltava River. 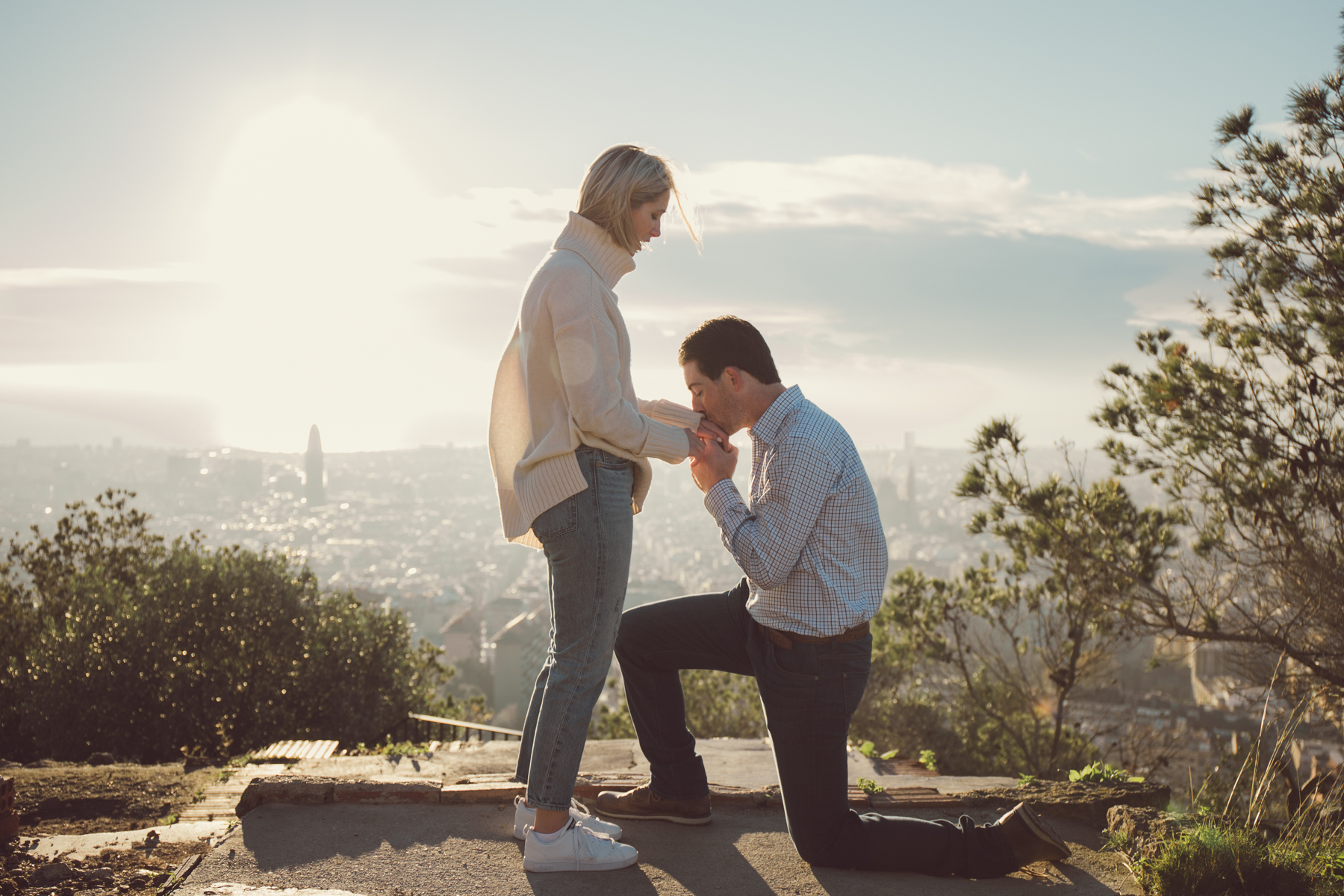 Los Bunkers del Carmel in Barcelona is a part of the city that tourists don’t always know about. It is now considered a viewing platform by many, but it was once part of the anti-aircraft battery that was used during the Spanish Civil War.

How do you get there? There is no direct transport that takes you to the very top. Instead, you can get the metro to Alfons X and walk 30 minutes from here or you could get the bus from the city centre which takes you closer to the top where you will have to walk around 10 minutes. The outstanding view of the city is best at sunrise. However, if you and your partner can’t face getting up that early, you can head there for sunset instead. With a panoramic view of the city behind you, pop the question to your other half to make it a moment to remember. See photos from a wedding photographer who captured a beautiful moment here.

You’re not far from the Christmas markets either. For example, the Fira de Santa Llúcia is the market around the Gothic cathedral close to the city centre and there is the Fira de Nadal a la Sagrada Familia from where you can see the unfinished Catholic church, designed by Antoni Gaudí.

For adventurous couples, skiing is an exciting winter holiday. With an extra-long season from the end of November to the first week of May, Val D’Isère is a popular choice of location. In fact, more Britons choose to take their annual skiing holiday here than anywhere else in the world. Part of its popularity lies in its differing slopes — there are pistes for all abilities and if your other half discovers that skiing is not for them, you can head to La Folie Douce (the famous après-ski bar).

You’re never far from jaw-dropping views either as you head to the top of the slopes where you’re surrounded by outstanding views of the mountains. But, for a proposal, you might want to head somewhere warmer where you can enjoy a meal and drinks with your other half. One place to do this is at La Grande Ourse, a restaurant situated on Mont Chèry. It offers an authentic fine-dining experience where you can get your own personal chauffeur to take you up the mountain in a Kassböhrer (a specialised snow trailer). Here, you will be met with views from an altitude of 1725m and enjoy a five-course meal in the restaurant — a memorable place to get on one knee.

In the past decade, tourism in Reykjavik has soared. It’s an ideal place to visit with your other half and offers the perfect balance between beautiful landscapes and quirky bars and restaurants.

A memorable backdrop for a proposal would certainly be the northern lights, visible from Iceland. The best time to see the lights is from October to March when the sky is clearer so they should be visible on your Christmas trip. You don’t have to book an excursion to see the lights and the phenomenon can often be seen at Grotta lighthouse which is situated outside of downtown Reykjavic where light pollution is low. You can walk here but if you have hired a car, due to the cold temperatures, it could be best to drive to the spot. For a romantic proposal, pop the question outdoors with the lights dancing behind you or for a more private setting, ask the question in the warmth of your car.

You won’t be short of other activities to do either. Head to Hafnarfjörður which is around a 20-minute bus ride from downtown Reykjavik to see the Christmas village — complete with handicrafts and live music.

One well-known market in the UK is the Belfast Christmas markets that sit in the grounds of the City Hall. For an impressive proposal spot, you should head to the top of Victoria Square in the city centre. Here you will find the Dome. Pop the question here for 360-degree views of Belfast as a backdrop, featuring the Prince Albert Clock and Scrabo Tower.

You don’t need to travel far for another amazing view, either. Take a trip to the northern coast of Ireland where you can cross the Carrick-a-Rede rope bridge with your loved one or retrace the steps of a giant at the causeway. You can visit The Dark Hedges nearby too — a romantic passageway of intertwined trees that were planted in the 18th century and featured on popular TV show, Game of Thrones. Make sure to wrap up though, as it’s likely to be chilly here in December!