Whether it’s a minor ailment or a serious issue, surveys show that 60% of men don’t go to the doctor when they need to. In many cases, men don’t feel comfortable discussing their health issues or they think that they can just tough it out. However, by raising awareness for the biggest issues men are facing, everyone can be better educated on the severity of issues, know what signs to look out for, and encourage conversations between each other. Here are some facts that everyone should keep in mind for men’s health. 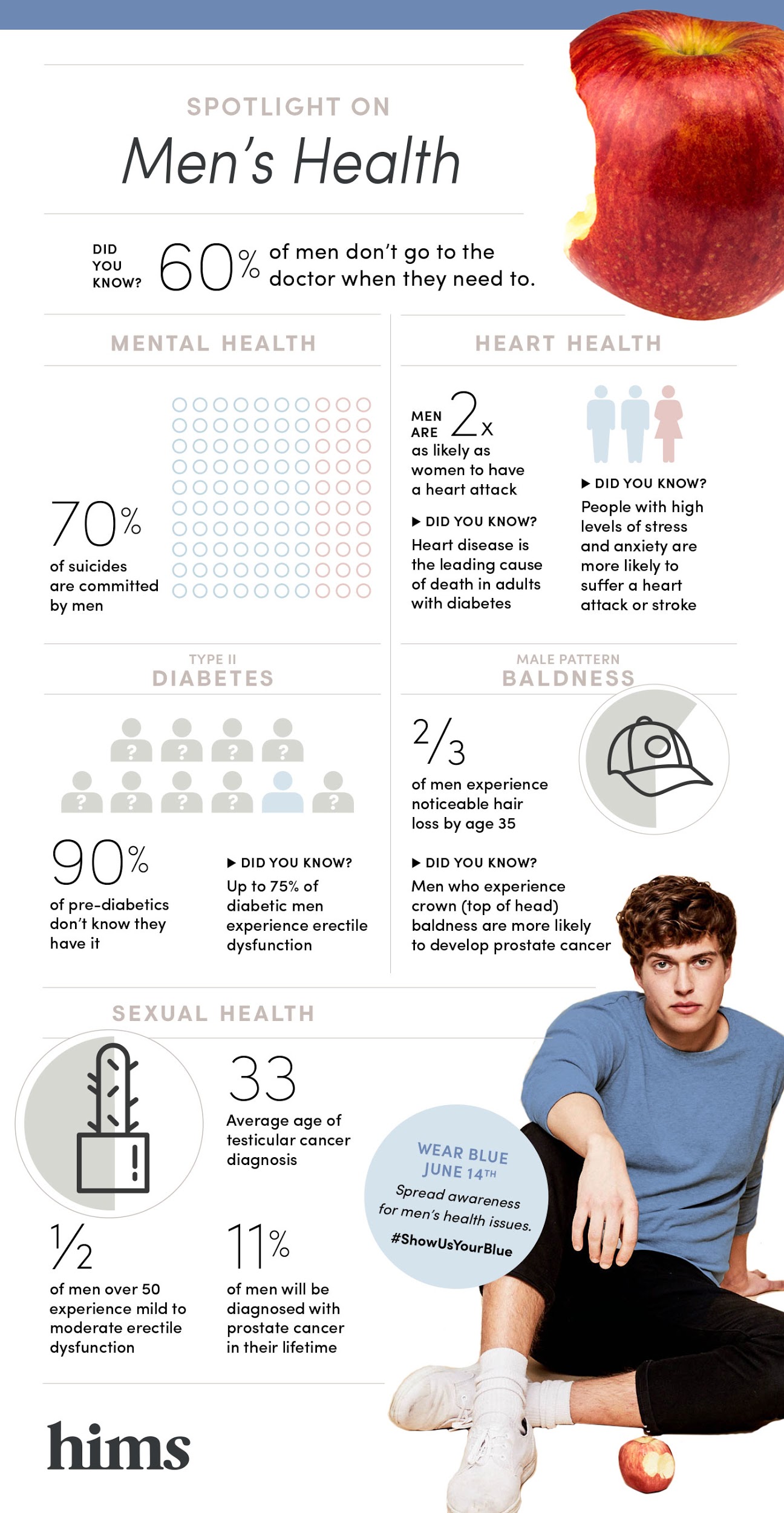 Erectile dysfunction (ED) may be most common in older gentlemen, but it’s still an issue that many young men may be faced with. More than half of men over the age of 50 deal with ED, so the odds are that a majority of men will develop the issue sometime during their lives. Perhaps what’s more shocking, however, are the results of a worldwide study on erectile dysfunction. The study found that 8% of men will begin dealing with ED between ages 20 to 29! Hopefully, by realizing how many men are battling the issue, guys will feel more comfortable discussing ways to combat erectile dysfunction with their doctor.

Male pattern baldness (MPB) is another one of those issues that can be a source of embarrassment for younger men. According to the American Hair Loss Association, a quarter of men who suffer from MPB start the process before they reach 21 years of age. By age 35, more than two-thirds experience noticeable hair loss, which actually puts men with full heads of hair in the minority! However, the best way to battle hair loss is by treating the issue when it begins, not after the damage is done. Minoxidil is a hair loss medication that works to stimulate blood flow to the hair follicles. Increased blood flow brings more oxygen and nutrients with it, which helps to promote growth and healthier hair in general.

It’s one thing to educate yourself on men’s health issues, but it’s even better to help others. Many people theorize why statistics have long shown that a majority of suicide deaths are men, especially when women experience higher rates of depression. It could be because men have more suicidal intent or that a majority of gun owners are men. However, it may also be the case that men are less willing to seek help for their mental health struggles. By stepping forward with your own battles and discussing with an online therapist, or reaching out to friends and family who may be going through a rough time, you are taking the first step towards proper medical care.

Having a conversation can help with more than just mental health, too. You don’t have to have experience with particular diseases to encourage other men to get tested. In the United States, 1 in 9 men will be diagnosed with prostate cancer in their lifetimes, making it one of the most common forms of cancer. If more men knew the likelihood of being diagnosed with prostate cancer, they may consider getting a PSA test earlier in life. By discussing when to get a PSA screening with friends and family, you could be saving a life.

Being proactive is the best step in preventing disease as well as early detection. The earlier you can begin treatment, the higher the success rate. This is why it’s important to live a healthy lifestyle and undergo proper screenings in a timely manner. This is especially true if you have a family history of disease such as diabetes.

Shockingly, 9 in 10 pre-diabetics don’t know that they have the condition. Prediabetes isn’t the same as diabetes, but instead is a signal that you may develop type II diabetes, which is why it’s imperative to be proactive. Ignoring symptoms of prediabetes increases your risk of developing diabetes, whereas lifestyle changes can help to reverse the issues and avoid diabetes altogether. A healthy diet and regular exercise can help to lower your blood sugar levels and lead an overall healthier lifestyle.

The same lifestyle choices can help prevent heart disease. Researchers aren’t sure about the exact reasoning behind the anomaly, but a decades long study of Norwegians found that men are twice as likely as women to have a heart attack during their lifetime. If you want to avoid an increased chance for heart attack or stroke, a healthy lifestyle should start at a young age. No matter what stage in life, it’s a good idea to quit smoking and reduce alcohol intake. But after years of abusing these substances, it may prove to be too late. It’s never too early to start making changes to your lifestyle.

Changing habits early is especially warranted for diseases that are more common in young men. The average age of diagnosis for testicular cancer 33 years of age. More importantly, it is the most common form of cancer for boys and men aged 15 to 44 in the United States. Luckily, when treated early, the survival rate is 95%. Therefore, performing monthly testicular self-exams and knowing the signs to look for is an important habit that should begin at adolescence.

Proper healthcare, treatment, and disease prevention starts with education. Raising awareness not only helps yourself, but your family and friends as well. Knowing the facts, having discussions, and dropping the stigmas surrounding men’s health can make a world of difference, and maybe even save some lives.