Recently, on a search for budget alternatives to the renowned GoPro action cameras, I stumbled upon the AKASO EK7000. Nestled among all of those cheap alternatives whose specs are greatly inferior to those which have made GoPro the leader in their field for so long, the EK7000 is a worthy competitor without breaking the bank.

At only £69.99 ($67.99), AKASO advertises this camera as a Sports Camera, and is currently among the leaders in budget skiing cameras on Amazon. For only a fraction of the price of a GoPro, the EK7000 boasts many of the same functions and qualities as its popular competitor. Below are a list of the advertised specs:

As you can see, many of the above claims give AKASO a lot to live up to. It might therefore come as a surprise that at less that £100, the EK7000 does in many ways meet its promises. Having played around with it for a while, I feel I can give an honest verdict on how the camera performs in each area. 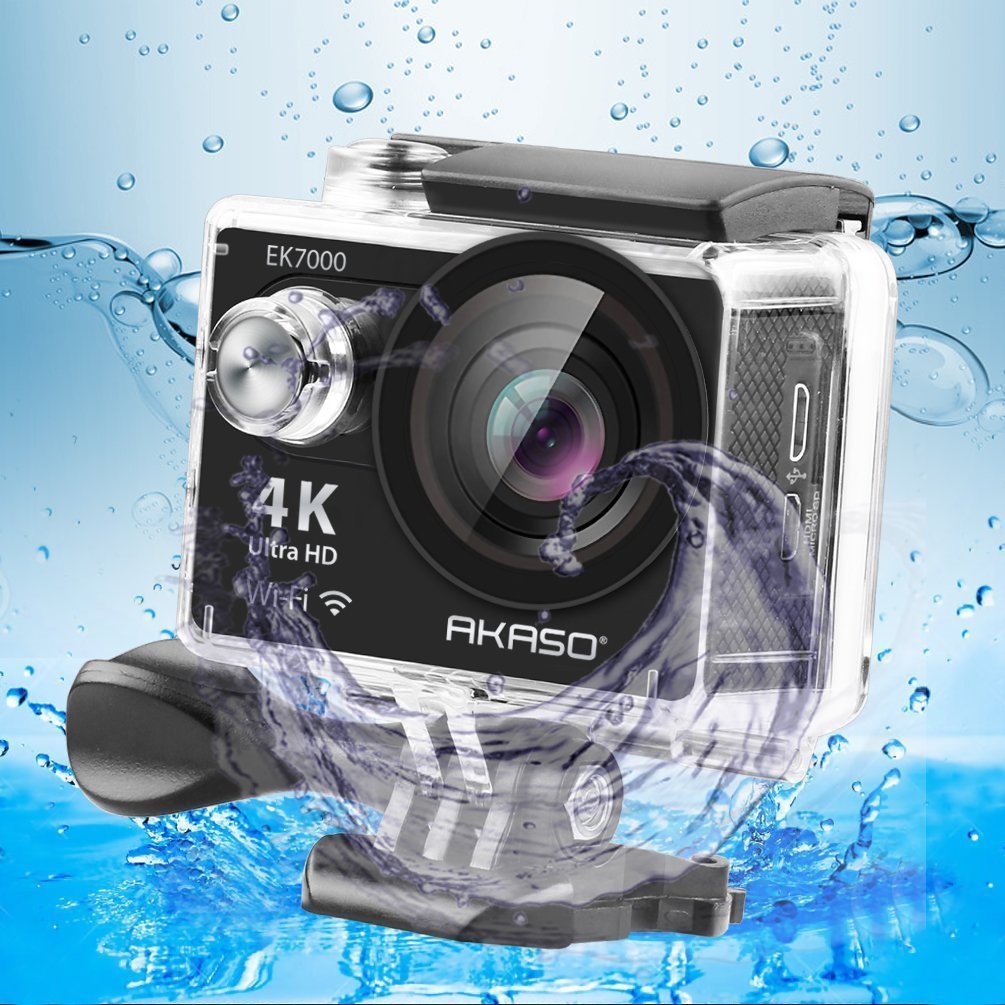 This might sound strange, that a camera comes with built-in WiFi. I didn’t quite understand the claim myself at first. As it turns out, it truly does come with a form of integrated WiFi, which works alongside an Android or iPhone app to transfer media from the camera as well as turn the smartphone into a remote with which to control the camera.

What this means is that by using the app, it is possible to take photos and videos while still seeing the live feed from the camera, without actually necessarily being very close to it. It sounds like a gimmick and it may be, but the functionality and smoothness of the app is in fact very impressive. Curiously enough, while using the app you can also see a live feed of the shot without actually having to record or take pictures, which makes for a whole world of espionage fantasies…

Not much to say about this one, apart from the fact that it certainly is a wide lens. The term ‘super wide’ doesn’t necessarily come to mind, but regardless it lives up to its claim.

Want to read other peoples reviews of this product? Read them here: UK Readers, USA Readers

The display on the EK7000 is incredibly crisp and clear. As you can imagine, displaying 4K, 2.7K or 1080p quality on a 2-inch screen does limit how much you can see of the picture itself, but for what it’s worth the display serves its purpose perfectly well. The aforementioned app comes in handy in this regard, as it is much easier to make out the whole picture on a smartphone screen.

The EK7000 requires a Micro SD Card for storage, which is not provided with the camera. It can support up to 32GB of memory and suggests the use of a Class 10 card. The card slips easily into a slot on the side of the camera, and although there is no door to house it like with many cameras, it seems very secure. Since it requires somewhat long nails to even insert or eject it, it doesn’t appear to be at any real risk of falling out. When powered on, the camera displays how many photos or how much video time the card can store, which at the maximum with a 32GB card is 10,000 photos and around 3 hours of video.

There are two input/output ports on the side of the camera, one for each of the above connections. So far, all that I’ve found the Micro USB port to be good for is charging the battery without removing it from the camera. I have tried to connect it to my laptop with the provided cable to see if it was possible to transfer media that way, but unfortunately that doesn’t appear to be the case. However, this has only been my personal experience, so that doesn’t guarantee it is a definite impossibility. It is still very much possible to transfer media to another device, as the Micro SD can simply be removed and inserted into the other device/an adapter to transfer files.

As for the HDMI connection, I haven’t been able to test that function out as I don’t own a TV (Shocking, I know). However, it can be assumed that media can be shared with a TV with the use of an HDMI cable, which is not included with the camera.

Want to read other peoples reviews of this product? Read them here: UK Readers, USA Readers

While the EK7000 boasts quality up to 4K, this understandably must be taken with a pinch of salt. At such a low price, it can’t be expected that the camera is that good without having any strings attached. That isn’t to say that it can’t technically take photos and videos at such high quality, as it certainly can, but the image is artificially enhanced to appear in 4K. In truth, it is more of a glorified 1080p, which is still a huge win for the price.

The camera can capture images at qualities of 4, 5, 8 and 12 megapixels, which can be chosen in the system’s settings. The image quality is very clear and appears to work well in most light levels, although obviously works best in prime, well-lit conditions.

Alongside the regular photo functionality, the EK7000 offers two more modes: Burst and Timelapse. The Burst function takes three photos in quick succession, all within 1.5 seconds. In theory, this should be good for action shots, in order to take a perfect photo of a quick event at a moments notice. Unfortunately, the reality is that the photos just come out blurred by any motion within the shots. The Timelapse function is much more impressive, providing the option to continually take photos at intervals from 2 seconds up to 20 seconds. Once mashed together and sped up, the individual photos can make a cool little stop-motion timelapse effect.

The camera comes packaged with two 1050mAh batteries and a dual battery charger. Each of these batteries can last up to about 90 minutes, then swapped out to double the usage time. They can be charged either whilst still in the camera, using the Micro USB port and cable provided, or in the included charger which allows both to be charged at once. The charge time is understandably fairly short, so there doesn’t have to necessarily be any huge disruption while using the camera for extended periods of time.

Now, this is obviously one of the key selling points of the GoPro cameras, which therefore makes it incredibly important for competitors. While on the one hand I can confirm that the EK7000 can in fact be waterproof, it isn’t meant in quite the same way as with many of the GoPro models. While the latter are built to be waterproof, the EK7000 is itself not waterproof, but instead comes packaged with a waterproof casing. Despite that, the waterproofing provided by this case is perfect, and does not affect the image quality. However, the same can’t be said for the audio quality, which does unfortunately suffer. To make up for that, the case allows for the camera to be attached to various mounts, many of which are included with the camera.

Overall, the EK7000 appears to be a great budget alternative to the GoPro, offering many similar functions for a fraction of the price. If, like me, you are new to the world of action cameras, I would strongly recommend you consider buying one of these for yourself.