In “The Murderous Affair at Styles“, her first novel, Agatha Christie introduces the world to Hercule Poirot. He is arguably the character who will in time become the world’s greatest detective. This book is set at the end of the first world war and was published in 1920. This review is based on the Harper-Collins Signature series that forms my personal collection, which includes Christie’s original diagrams as clues to the mystery.

The challenge of the book is strange happenings at the village of Styles St Mary. It is here we are introduced to the narrator Hastings, then later to his companion, the great detective. Hastings was taking some well-earned country rest from his wartime duties when the whole affair started. Hastings knew John Cavendish from his younger days, a time before Styles Court had been turned into a convalescent home at the end of the war.

Hastings expressed his desire to become a detective, a true Sherlock Holmes. All because he had an admiration for the work of an old friend he had met many years before. A petite Belgian that he had one time been acquainted with.

Host John Cavendish was concerned telling his wife Mary, “there’s the duce of a mess.” Evelyn Howard, consistently opinionated, spoke her mind about Mrs Inglethorp, then sought out Hastings as her confidant. With all the controversy during the day Hastings had a premonition of approaching evil when Miss Howard departed soon after.

A chance encounter in the village, Hastings bumped into a short man at the post office. This was the first time Hastings and Poirot had seen each other in many years. Poirot was also staying in the village, with fellow countrymen in a rented house. He was prim and proper at all times, with a well-groomed moustache – stiff and military in style. He was an extraordinary little man, also known by the Cavendish family.

In the middle of the night, Hastings was awoken by Lawrence Cavendish, they were soon joined by brother John. Mrs Inglethorp’s room was locked or bolted from the inside. Her husband Alfred Inglethorp missing, his bed had not been slept in. They were forced to break the door down to discover the old lady suffering violent convulsions on her bed. Moments later she was dead. Had she been poisoned? The question on everyone’s mind. 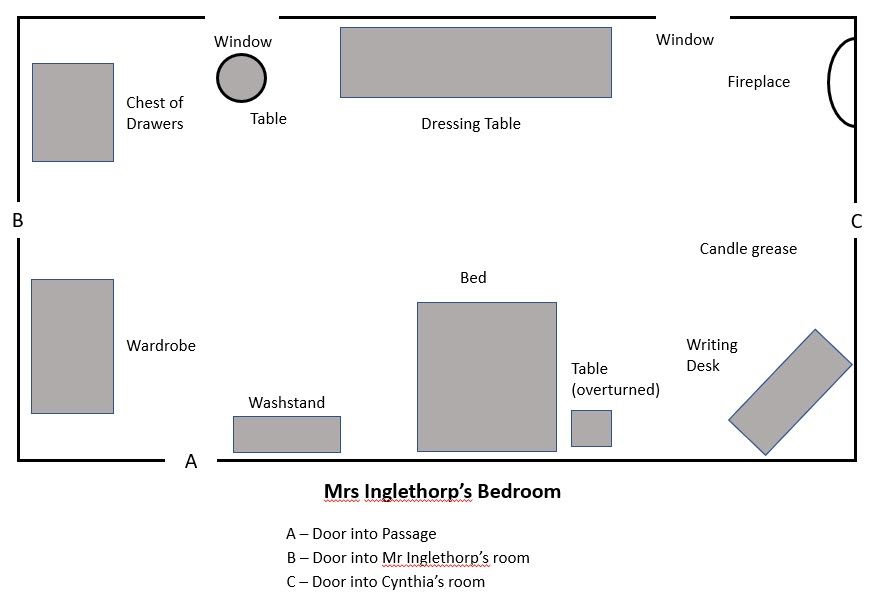 Hastings insisted his friend be brought into the case and investigate before the post-mortem could be arranged. Time is the great advantage to catch the murderer he suggested. The family feared scandal, but Hastings assured discretion.

Alfred Inglethorp is found wandering the village streets, heading home after sleeping the night at a friend’s house. Hastings woke Poirot, who listened to the mysterious affair. He would investigate and put the little grey cells to work. His first question… had Mrs Inglethorp eaten well the night before? How did that matter?

The fallen table, a lamp, broken in two places, a coffee cup broken into tiny pieces, a bunch of keys on the floor, a circular stain on the brown carpet, a burnt scrap of paper, a void will. What did the parlourmaid hear at the door? What did it all mean? Could Poirot solve the mystery?

In this story, it is possible to see that spark of brilliance that introduced Agatha Christie as a great story-teller. Poirot is still short of being that fully rounded character of later books in the series, but Christie showcases her skills as a writer admirably in her first novel.


This post contains affiliate links. Affiliate disclosure: As an Amazon Associate, we may earn commissions from qualifying purchases from Amazon.com and other Amazon websites.