Menu
Search
Menu
Search
Photo by frank mckenna on Unsplash
From Oceans to Embassies: A Personal Memoir by Gillian Angrave’ invites readers to find their sea legs and set sail with the author on a life of globetrotting, beautiful discoveries and even perilous danger. Gillian’s career has taken her from Assistant Purser onboard P&O’s traditional liners of the late 1960s and early 1970s to three decades serving as Ambassador’s PA with the Diplomatic Service. In this book, along with over two hundred photographs, Gillian Angrave tells her story in full. It’s a life unlike anything else.
Now on her third career as an author and Registrar of Marriages, Gillian Angrave’s life is still both busy and fulfilling. However, if you’re lucky enough to sit down with her, Gillian’s life of travel will keep anyone on the edge of their seat for hours.
It was a four-decade career that saw her transition from the fun of traditional British liners to the dangerous, politically-charged years she spent with the Diplomatic Service. But whether Gillian was helping passengers with their problems, taking part in the on-board entertainment, or dealing with expulsion from Guatemala – she wouldn’t have changed it for the world.
In ‘From Oceans to Embassies: A Personal Memoir by Gillian Angrave’, the full story is now being told for the first time. 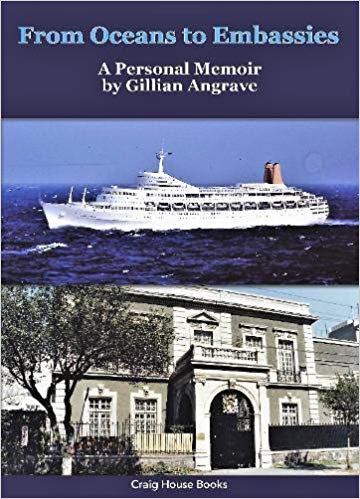 Gillian Angrave’s dream of seeing the world has led to a lifetime of unforgettable, sometimes dangerous, but always exhilarating, experiences and encounters, both sailing the Seven Seas as an Assistant Purser with P&O from 1967 to 1974, and as Ambassador’s PA with the Diplomatic Service from 1976 to 2005, serving in the Philippines, Peru, Guatemala, Chile, Mexico and Hungary.
In “From Oceans to Embassies”, she charts the course her life has taken and, with the help of more than two hundred stunning photographs, she re-lives her most memorable, as well as most perilous, moments, that have taken place beyond our shores.
In the first part of Gillian’s book, she sets the scene as she writes about her background, school years and early working life.
The middle chapters are devoted to her six highly enjoyable, amusing and at times challenging years as an Assistant Purser onboard P&O’s liners ss CANBERRA and ss ORIANA.
After a brief resumé of the history of that most illustrious company, Gillian goes on to describe what life on board was like in the late 1960s and early 1970s, so very different from what it is now. In those days the ship’s company provided most of the entertainment, in addition to their normal duties. Versatility was the keyword, and her love of dancing, in particular, proved invaluable as she demonstrated her skills at the Can-Can, the Charleston, and Hawaiian dancing.
On a more serious note, Gillian was fascinated by the technical side of sailing, and gained her Certificate of Efficiency as a Lifeboatman, as well as her Steering Certificate, recounting these challenges by way of amusing anecdotes.
At the end of this section, she takes her readers on a tour of the more exotic and fascinating ports of call that she visited, again beautifully illustrated by her photographs, with snippets of interesting information added for good measure.
Gillian then goes on to relate her compelling, and at times traumatic, experiences as a member of the Diplomatic Service. Each of her postings presented their own particular problems and difficulties, and she found the ordeal of being expelled, along with her colleagues, from Guatemala in 1981 both extremely harrowing and distressing. Having had to return at short notice to the Foreign Office in London, she was just starting to recover from the effects of this nightmare when she was posted to Chile in time for the Falklands conflict, made all the more poignant and worrying for her as her beloved CANBERRA was playing a part in that dispute too.

In the final section of her book, despite the heartbreak of having to retire from the Diplomatic Service upon reaching the age of 60, Gillian sets out to prove that although one door closes, another one invariably opens, as she embarks on her third career as an author, and as a Registrar of Marriages in West Sussex. She loves this work and feels very privileged to be able to play a part in a new chapter of a couple’s life together.

Her traveling days are not over either, and she ends on an upbeat note as she looks forward to yet another cruise, as a passenger this time, believing in her mantra: ‘
“Live your life like a butterfly: take a rest sometimes, but always remember to fly”.
The world is still her oyster!

“I start by taking readers right back to my childhood – to where it all began,”

“The book then plays out as a chronology of my life; how I came of age, grew to love sport, my first taste of work, and the decision to join P&O in what would be the start of forty unforgettable years traveling the world.”

“I got to see life both from the whimsical and the dangerous side…and I use the word “dangerous” intentionally, because life in the Diplomatic Service was, on occasion, anything but safe. I also take readers through the tough transition of having to adapt to life back in the UK, and the new existence I embarked on that was so different from anything I’d known before.”

“Looking to the future, I feel very excited and privileged to be playing a part also in P&O Heritage’s forthcoming online exhibition looking at the changing roles of P&O’s Women at Sea, coming soon to poheritage.com. I am an avid supporter of all that P&O Heritage do to preserve and celebrate the maritime history and collections of a company I loved so much and felt proud to serve, one of the best-known companies in the world.”

Gillian’s book is thoroughly entertaining, often unbelievable, and is unlike any other memoir you’ll ever read!
‘From Oceans to Embassies: A Personal Memoir by Gillian Angrave’, published under Craig House Books, is available now.
For more information and to purchase, please visit the author’s official website: gillangrave.co.uk/

Born in Leicester in 1945, Gillian was educated at Guthlaxton Grammar School and the Leicester College of Technology. After three years working in Leicester as a PA for an architect, an engineering company, and The Rank Organisation, she joined P&O as an Assistant Purser in 1967, sailing in CANBERRA and ORIANA until 1974.
After a brief spell ashore, she again got itchy feet and in 1976 joined the Foreign & Commonwealth Office as Ambassador’s PA, a position she held, and greatly enjoyed, for almost thirty years. Her postings took her to the Philippines, Peru, Guatemala, Chile, Mexico, and Hungary. She retired from ‘The Office’ on 16 April 2005, her 60th birthday.
Single (her love of travel somehow always seemed to get in the way of marriage), upon retirement Gillian became, and still is, a Registrar of Marriages in West Sussex, a job she also loves.  Now she marries everyone else!
Throughout her life, Gillian has enjoyed photographing and writing about all the exotic places in which she has lived, and which she has visited, mainly in short articles for societies and other groups.

“My life has been spent fulfilling my dream of traveling the world” she explains. “I count myself so lucky and privileged to have sailed the Seven Seas and been sent on postings with the Diplomatic Service to such exciting and interesting countries. Travel has been my constant companion and I wouldn’t have missed the experience for the world. I intend to keep traveling for as long as I can.”